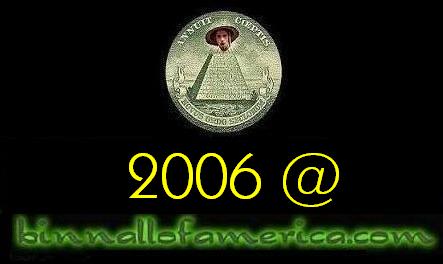 If 2005 was about getting BoA up and running and assembling the necessary pieces to become an esoteric stopping point in cyberspace, then 2006 would best be described as the year we stood up against the test of time. Looking back over the past year, one thing that was remarkably apparent was the sheer consistency of the BoA staff. 39 new K-Files, 43 new Grey Matters, 25 new Trickster's Realms, 51 new editions of the binnall report, 31 new episodes of BoA : Audio producing over 47 hours of esoteric radio, and 52 Hot Newz features, amongst the over 365 updates found @ binnallofamerica.com in 2006.

2006 saw Khyron of khyron.net fame, Lesley from The Debris Field, and R.Lee from the Orange Orb blog, each celebrate a year of work with BoA. Their tireless dedication throughout the year was imperative at keeping binnall of america at the forefront of esoteric news and opinion. In addition to that, BoA founding father Joe Vee and BoA friend Ralph Molesworth contributed columns during the BoA : Audio off-season, this past Summer, helping to add fresh perspectives on the esoteric landscape. I personally want to thank the BoA staff for making my job as de facto editor-in-chief so easy. It has been a joy to work with you and I'm looking forward to our collective future here at binnallofamerica.com.

BoA expressly wishes to thank our great readers and listeners, those who have been with us for quite some time, and those who discovered us at some point in 2006. It is your support that keeps this website running and provides the opportunities for BoA to evolve. This site would be nothing without its remarkable audience, so thank you !

2007 @ BoA will be a year filled with more esoteric news and opinion, more underground audio interviews with big names in esoterica, and more of that off-kilter perspective unique to binnallofamerica.com. We also have big plans for exciting new projects that will take shape in the coming year and will bring the BoA brand to greater heights than ever before. So stick around, because the next 12 months should be one wild ride.

Join us now in a look back at some of the highlights of 2006 @ binnallofamerica.com.

We were all over the Sylvia Browne Meltdown in all its gruesome detail.

After one year, News Watch was officially retired @ BoA.

BoA : Audio looked back on 2005 and ahead to 2006 with exopolitical guru Steve Bassett 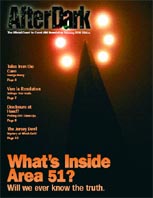 BoA : Audio discussed the Spear of Destiny with Jerry E. Smith in a two part interview.

Lesley reacted to the Charlie Sheen 911 story in Grey Matters.

Khyron's The K-Files morphs into a feature length column style.

binnall's interview with Alex Jones is published in "After Dark" magazine. 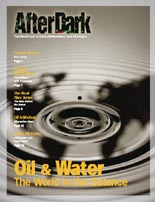 Lesley celebrates one year @ BoA with Grey Matters : A Year Gone By.

binnall is named one of Ufology's Generation Now by Paul Kimball.

BoA was possessed on 6.6.6, but managed to fend off the demons, thanks to our exorcist.

Joe Vee emerged from the shadows to kick off the Wrath of Joe summer session.

Khryon was ahead of the curve, covering the impending SETI - Shostak feud in K-Files.

BoA responded to the SETI v. Shostak feud with coverage in Hot Newz, the binnall report, Grey Matters, and The K-Files.

The BoA staff looked at the 5th anniversary of 911 in Grey Matters and The K-Files.

Art Bell's new wife was pregnant and Khyron celebrated it in The K-Files and binnall lampooned it in Hot Newz.

binnall went to Las Vegas for the UFO Crash Retrieval Conference IV, bringing back a full recap and pictures, courtesy of Ralph Molesworth.

Hot Newz kicked off Coastie season with the first of five Commemorative Posters.

The 2006 Coastie Winners were revealed.