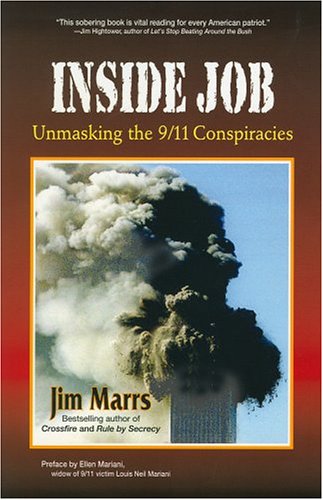 Review : "Inside Job" by Jim Marrs

On the third anniversary of the fateful attack on America, it is important to not be overcome with grief and sadness and instead look at the event from a clearheaded and logical point of view. Thankfully, Jim Marrs, veteran conspiracy theorist, does just that with his new book "Inside Job : Unmasking the 9/11 Conspiracies".

Like his landmark books "Rule By Secrecy", "Crossfire", and "Alien Agenda", Marrs outlines the facts, as we know them, of 9/11. He details the total failure of the defense systems in place to prevent such attacks as well as the many pre-9/11 warnings that came from a variety of sources, both domestic and foreign. He also goes into the post-9/11 actions of FEMA, who quickly and effectively destroyed all evidence left over from the WTC, and the Federal Gov't, who stifled and stymied numerous attempts at a thorough investigation of the events of that day. Marrs takes the reader step-by-step through 9/11, showing that, in numerous instances, the story of 9/11 is not as air-tight as the government and media claim it to be.

Marrs does not make the mistake of many other Americans in choosing to let fear and anger guide them in believing the "official" 9/11 story espoused by the government and parroted by the controlled mass media. Instead, he uses the many news stories covering 9/11 to point out the inconsistancies in what the American people have been told so far. As is the case with all of his books, "Inside Job" is vigorously sourced and provides ample areas for further research.

The book asks many important questions ranging from how the government let so many clues slip past them prior to 9/11, to the gross negligence of NORAD in stopping the hijacked flights (a practice previously used on numerous occasions by the same agency), to the intriguing means by which the planes may have been piloted, considering sources at the Florida pilot school claimed that the purported hijackers were lousy pilots. Throughout the book, Marrs punches hole after hole into the story of 9/11, showing, in many areas, that the story simply does not hold any water.

While the book came out a few weeks prior to the release of the 9/11 Commission's Report, Marrs does an excellent job in looking at just who was on that commission and their many ties to both the Bush Administration and the Council on Foreign Relations. Marrs also goes into great detail on the many instances of the Bush administartion standing in the way of their investigation, including early attempts to name CFR bigwig Henry Kissinger as head of the commission. Sadly, the 9/11 Commission joins the Warren Commission as another offical whitewash of dubious events by the government. The lack of thorough research into the many "loose ends" of 9/11 are a perfect example of the axiom of "garbage in, garbage out" and render the final analysis by the commission a useless "investigation" into the events of that day in September.

The foreword by Ellen Mariani, a 9/11 widow who is sueing the Bush administration, shows that those who believe in a 9/11 conspiracy are not limited to "kooks" watching for black helicopters and cursing the UN. There is a growing body of work and people who are waking up to the fact that the government is not telling the whole story of 9/11. A recent Zogby International poll showed that 50% of NYC residents believe that the goverment had prior knowledge and failed to stop the attacks. These numbers must be unsettling for those behind the attacks, as they go against the probable intended reaction of fear and compliance with tyrannical legislation and war.

The downside to "Inside Job" is its rather brief length, a mere 160 pages (200 with appendixes) and the fact that much of what Marrs presents was already in his 2003 book "War on Freedom", which is no longer available. However a foreword by the publisher promises a second edition of "Inside Job" detailing many of the questionable responses to 9/11 by the Bush administration from the Patriot Act to the present war in Iraq. Perhaps, when combined, "Inside Job" will rival the other lengthy books in Marrs's catalogue.

While many in the mainstream will, and do, deride Jim Marrs as a "conspiracy theorist", the true faulty conspiracy theory lies in the mainstream account of what happened on 9/11. The story of 9/11, as told by the mainstream media, is the most ill-conceived conspiracy theory ever foisted upon the American people. The fact that much of the American public is now waking up to the fact that the story simply does not add up is a promising sign for our future, while also being ominious in that it may cause the "powers that be" to orchestrate another event to scare us all into falling into line again. Aside from the numerous internet sources of research into 9/11, "Inside Job" is a fantastic starting point for anyone questioning the story of 9/11, laying it out in logical fashion and letting the reader decide for themselves.