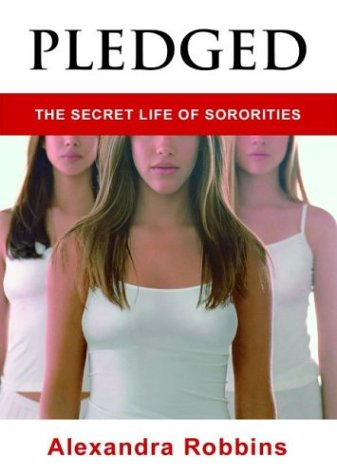 After making serious esoteric waves with "Secrets of the Tomb", Alexandra Robbins makes a leap to secrecy of a different kind in "Pledged", her in-depth look at sororities and the Greek system. While the participants are not the power-brokers of her previous book, they are equally compelling. After previous unsuccessful attempts to infiltrate a sorority, Robbins befriends four sorority girls at an anonymous college and goes "undercover" for a full school year. Meanwhile, she also speaks with hundreds of sorority girls, attends National Greek conventions, and does a vast amount of research. A topic like this would give other authors license to be lax with serious research, but Robbins seems to excel at observing the world of today's young adults.

It all begins with four sorority girls arriving at college and moving into their sorority house. Three of them belong to the same house, so their stories intertwine, while the fourth provides a sole perspective. It unfolds from there in an easy narrative form, peppered with affirming quotes and sources. Throughout her own journey of discovery, Robbins even surprises herself when she realizes that many of the sorority stereotypes tend to confirm themselves : I learned that many of the rumors (as well as the fantasies) about sororities are indeed staggeringly true, including those concerning loyalty, sex, conformity, drugs, violence, verbal abuse, mind games, prostitution, racism, forced binge drinking, nudity, cheating, eating disorders, rituals, "mean girls", and secrecy." Yikes. Yes, all that. Despite that litany of crazy behaviour, the book is not an exercise in sensationalism. On the contrary, the nonchalance of things like date rape, eating disorders, and drug use in sororities adds a sobering dramatic air.

The story of the girls' school year plays out like a reality show with seemingly no editing and open discussions of their drug use and sex lives throughout. To someone recently removed from college, the stories of hook ups and pregames are familiar, but the underlying drama of their former lovers looming and rash decisions made while intoxicated add weight to otherwise normal fare. The only serious criticism of the book would be the difficulty of following all four as they begin their school year, but by about a third of the way through, they are fairly distiguishable. The growth of the girls throughout the year suggest that the book improves on a second reading when one can see some of their missteps coming.

From a wide perspective, one clearly sees a massive, cult-like society of people beholden to tradition that is often long since forgotten. This is evident from the very beginning of the book, as each of the four girls struggle to gain a foothold in the social structure that is the Greek system on their college. The peer pressure is immense, as there is very little privacy and many of the girls' major decisions are made via the endless nudging of their fellow sisters. One girl breaks up with her longtime boyfriend whom she'd planned on marrying and one nearly pierces her clit. While one would assume they'd be getting deeply involved in their studies, they quickly become an afterthought as they prepare for an endless series of sorority mixers, pageants, and talent shows. To the outsider these activities seem pointless, but within their world the prestige of victories over other sororites provides more opportunities for parties and recruitment.

Recruitment into any society like this is illuminating to outsiders. In most sororities, certain quotas come from the National offices, which seem preoccupied with both their National image and the almighty dollar. To them, recruitment involves politics and money. To the individual sororities, it means the pressure to get the required amount of girls and to make sure they fit their image. To meet their lofty demands, sororities use a variety of ways to bring in members. The begin with a proverbial "cattle call" of prospective new members, followed by a rigorous weaning of the contenders, followed by a, sometimes intricately choreographed, "meet and greet", topped off by final decisions and an immediate and intense immersion into their world.

This intense period, known as "pledging" runs the gamut of different forms of hazing, from physical to mental abuse. Robbins provides highly detailed accounts of many different pledging periods, including two accounts of the infamous "circle the fat" hazing ritual. Robbins is sure to point out the many tragedies that result from some sororities and fraternities hazing rituals. She also points out the mysterious events that often follow such tragedies that smack of collusion between the sororities, the colleges, and various alumni. That's not to say that all hazing is brutal or dangerous, as the majority of it seems to be trivial and more humiliating and time consuming. The pledges are also readily put on display for the fraternities and are added to the social mix at the behest of their sisters. The series of events involved in pledging culminate with a convoluted ritual that admits the girl to the sorority. Upon admittance to the sororites, newcomers quickly pick-up the standards of their house, making them even more homogenous. They are also expected to adhere to national rules of their sorority, which are loosely enforced and often only used for punishing girls who have fallen out of favor with the majority.

Robbins's outsider perpective brilliantly captures the simplistic nature of the rituals that sororities use. She describes the variety of handshakes, knocks, and symbology that are held in such high esteem by various groups. She also shows how these sames symbols, in turn, become revenue generators for the National groups which broker lucrative licensing deals. She also deserves credit for not just her excellent research into this strange world, but also for adding a variety of measures that could be taken by both sororities and colleges to curb the many rampant problems with the system. The book is reminiscent of Jon Rappaport's "The Secret Behind Secret Societies" in that it lays bare the many "tricks" used to recruit and keep members for a secret society. However, "Pledged" has a stronger narrative thread and a more palpable feel than Rappaport's tome.

As can be expected, this book has caused somewhat of a firestorm among the Greek groups nationwide. An astounding 153 Amazon reviews by readers despite being published a scant 5 months ago attests to the passion caused by "Pledged". One reviewer, who belonged to a sorority said "My sorority's Ritual, thankfully, wasn't discussed, but I feel terrible for those whose was. Our ritual is sacred to us, and publishing it for anyone to read is almost like being raped. I can't imagine how it would feel to open a book and see my ritual typed out for the whole world to read." Another sorority girl said "I cannot believe that one person could attack something that has existed for over 100 years, and has thrived as part of college life. I hope that she is proud of herself for releasing secrets into the public, and making sororities look like nothing more than a bunch of girls with eating disorders, and sex, drug and alcohol problems". These reviews, amongst the throngs, display the deep divide in perspective of readers who are either Greek or not. Regarding the controversial nature of the book, those that are shrouded in secrecy often fiercely guard it and lash out at those who attempt to expose their secrets. Robbins, meanwhile, sees the commercial value in shining a light on otherwise overlooked areas of society and pointing out the darker side to those realms.

A serious book about 18 to 20-something young women who belong to secret socities, do drugs and have casual sex ? Yes. And that's why it has earned the most recommendations of the many books that passed through the offices of binnallofamerica.com this summer. This book is a voyeur's dream, while also being highly educational. In a world sorely lacking of deep first-hand perspective to secret socities, "Pledged" is a welcome addition to the esoteric canon.