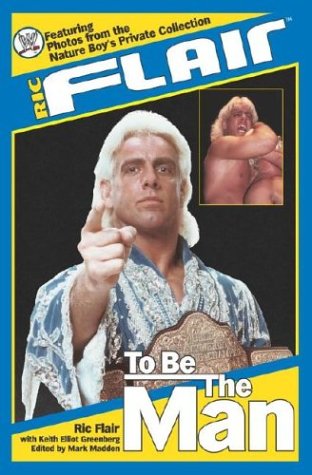 Review : "To Be The Man" by Ric Flair

"For the last fifteen years or so, I've been told I'm the greatest professional wrestler that ever lived. Better than Frank Gotch and Lou Thesz, Bruno Sammartino or Verne Gagne, Gorgeous George or Hulk Hogan."-- Ric Flair, "To Be The Man", Page 1

Few wrestling books have been as eagerly anticipated as the long awaited autobiography of the legendary Ric Flair. Without a doubt, Flair sits atop the list of greatest professional wrestlers of all time and his perspective on that climb to the top makes this book a must have for any serious scholar of the genre. From a business perspective, it's a fascinating look at the Mid-Atlantic / Georgia regions of the NWA throughout the beginnings of the wrestling war of the mid-80's. Flair's status as perennial World champion of the NWA provides a first hand perspective on events only told about from the outside in books like "Sex, Lies, and Headlocks" and "Chokehold". This book tells the tale of his rise to the top and the political machinations that went along with staying there and how, after all his enemies and critics had taken their pot shots, he still rose to the top of the game and was recognized by his peers as the best.

Not too much time is spent on his childhood except for the startling revelation that he was stolen as a baby by a crooked adoption ring in Tennessee and sold to wealthy parents in Minnesota. His wild teenage years steered him to he world of profesional wrestling where he fit in perfectly with hell raising legends like Dusty Rhodes, Dick Murdoch, Johnny Valentine, and Wahoo McDaniel. These legends schooled him in the art of the game and gave him a legitimacy that few breaking into the sport could accheive. Just as his star was rising, Flair was nearly killed in a plane crash that ended two careers and left the pilot dead. Thankfully, Flair survived with "merely" a broken back. When Flair came back a few months later, it was clear he was among the upper-echelon of wrestlers in the world at that time, especially after a series of legendary bouts with another up and coming star, Ricky Steamboat.

At about this point, Flair begins to see the politics that go into being one of the top stars and his laid back business style would begin to hurt him as other stars with selfish agendas would jockey for power in a world were only a few can be the best. As the wrestling wars heat up, Flair continually takes the blame for the failings of the NWA in trying to stop the WWF juggernaut. Poor business decisions and overspending were killing the promotion despite Flair's usually stellar performances against often lackluser opponents. His time as NWA World Champion culminated in a year that featured Flair in the greatest trilogy of matches ever : 1989. Flair battled Ricky Steamboat in matches tha finished in the top three of that year. He went on to feud with Terry Funk in more brutal series that were completely different from the previous Steamboat series but almost as legendary for their quality. Eventually, Flair is squeezed out of the NWA by their head Jim Herd who is determined to topple the WWF. With the backlash of the loss of Flair, Herd is quickly fired, but Flair heads to the WWF.

Flair in the WWF in 1991 was supposed to the biggest thing ever at that time, but a combination of a looming steroid scandal and lousy business kept it from blossoming into the dream feud the public wanted. Flair showing up in WWF with the NWA World Title was one of the most historic moments in wrestling history and just one of many for Flair. His tenure in the WWF, while brief, added another layer to his legacy as he picked up two world titles and put in an amazing 60 minute performance that still ranks as one of the greatest Royal Rumbles ever. With promises of a different corporate structure in the NWA, now Turner owned WCW, Flair leaves WWF to return to the league where he is best known.

Sadly, it's business as usual soon after his return and he is constantly undercut and disrespected yet still relied upon after the company makes numerous mistakes in their planning. Flair was one of a handful of wrestlers the fans wanted to see in WCW, but management was too stubborn to let them relish in it. After another management shakeup, Eric Bischoff becomes head of WCW and then things go from bad to worse. At first Bischoff, perhaps seeing that Flair is WCW's top star, befriends him. However, he quickly uses Flair to bring Hulk Hogan to WCW, giving Hogan an extravagent contract that included creative control, an unheard of concept in wrestling at the time. Hogan, perhaps jealous of Flair's legendary status, dominates his feud with Flair, ruining yet another would-be dream series. Flair is never really respected again by the powers that be in WCW as Hogan begins stocking the league with his allies and other WWF cast-offs.

The book gets a bit scatter shot at this point, although it is understandable as it is probably the worst stretch of Flair's career. With the addition of the NwO to WCW, the roster becomes so bloated that the deck even more stacked against Flair. Upon gaining the top spot in wrestling, WCW gave out huge contracts to just about every top star and many undeserving lower stars yet still underpaid Flair who was still one of the top 5 most popular stars in the league.

Soon, Flair begins to just not care anymore and a disagreement with management results in a huge lawsuit and a hiatus for Flair. During this time, Bischoff continually ran Flair down to the WCW wrestlers

The lawsuit eventually gets settled and Flair comes back to WCW. At this point, the writing was on the wall and WCW wasn't going to last much longer. Despite numerous attempts to jumpstart the league, WCW eventually goes bottom up and WWF buys it for barely a thing. Flair was just about done at this point. Years of being treated like garbage by WCW had left him depressed and questioning his self worth. Finally, WWF called and he came aboard, despite trepidations that he would not fit in with today's stars. Flair is surprised to see that he is finally treated as the legend he is by the many in the WWF locker room. Essentially the story ends with Flair having outlasted the rest to still be at the top of the business.

What would a wrestling book be without the perspective on the many characters that enhabit this strange world ? Flair finally gets his rebuttal to the many loudmouths who had run him down in the past. Mick Foley, who ripped on Flair in his autobiography, is not spared in the least by Flair. Called a "glorified stuntman", Flair defends himself against Foley's claims that was held down by Flair in WCW. Flair also rips on Foley's reliance on hardcore style of wrestling and points out Foley's enormous ego: "[But] in my estimation, Mick Foley was not a great worker. He couldn't punch. He couldn't kick. In the World Wrestling Federation, he's spend half the day before television broadcasts sucking up to the writers - because he's such a fan of himself." Ouch.

Flair's no kinder to another legend who disputed his greatness, Bret Hart. Flair, who'd wrestled Hart in both WWF and WCW, accurately critiques Hart's often mocked style. "He was a good, sound, physical wrestler with limited charisma and interview skills." Flair goes into a nice little explanation of how Hart had a specific series of moves he used at the end of each match and refused to even alter them a tad.

Perhaps most justifying was Flair's retort to Shane Douglas, a wrestler who made a career out of ripping on Flair and claiming he'd held him down. Flair makes his rebuttal short and sweet : "if you're good in this business, you'll figure out a way to show it to people. If you're great, it will eventually come out. Douglas was neither good nor great. He was never a star of any significance. I've made more people than Shane Douglas ever entertained in his life."

While that "receipt" was a long time coming, Flair even remembers one night when Scott Steiner "went into business for himself" live on Nitro and ripped on Flair. Flair response is poignant, pithy, and true : "He's a guy who meant nothing as an attraction, drew no money, and has no legacy. People will forget him the minute he retires. Most wrestling fans have already forgotten him. He's mid-card talent now."

Flair gets his digs in at a lot of the people who ripped on him and tried to sabotage his career. He makes a point of demonstrating the differences between Hogan's legacy and his in wrestling and it becomes obvious why Flair is regarded as the best while Hogan is was in the right place at the right time. The long standing professional rivalry between the two is alive and well in the pages of the book, as comparisons are drawn to Hogan on numerous occasions.

He also gives a compelling look at what goes on in the mind of a top star in wrestling. The political intrigue had it's affect on Flair who comes off as a nice person operating in a world full of double dealing carnies. His bouts with depression throughout the end of his run in WCW are gut-wrenching. To be the greatest star of all time in an industry that has little regard for it's past is a burden that bears itself down on Flair many times.

It's nearly impossible to distill the wealth of information availabe in the life story told from the top of the mountain. Flair's career crossed with so many other's that he's got stories on just about every big name in wrestling that he came across. The countless storylines he was involved in are detailed from behind the dressing room door where the battles were real and often crazier than what went on for the fans. The irrational business decisions and foolish money making schemes of professional wrestling are recounted in all their glory.

Simply put, it's the story of wrestling's history from the late 1970's to today from the guy who was at the top of it all throughout the entire stretch. They don't get any better than Ric Flair and this book provides another in a seemingly endless career of awesome performances.