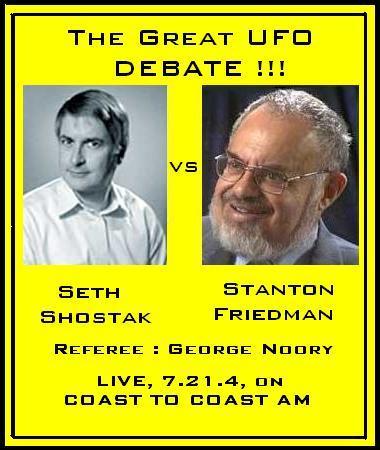 Once every rare occasion, two guests enter the confines of Coast to Coast to settle a grudge. An issue so divisive that it must be taken to the extreme, the C2C Debate, a knock down drag out event held under the auspices of the esteemed George Noory. Wednesday, July 21st, Stanton Freidman and Seth Shostak will take up arms and engage in a battle of wits beneath the strains of Giorgio Moroder's "Midnight Express". Facts will fly. Egos will be bruised. Rants will be interrupted. Vindictive chiding will take place.

Friedman is a long-time critic of SETI (Search for Extraterrestrial Intelligence), calling it Silly Effort To Investige and, it is believed, he threw the first public stone by lambasting SETI on his 6.19.4 appearance on Whitley Streiber's "Dreamland". A hastily organized debate between Friedman and SETI's Seth Shostak was arranged for 6.22 on C2C. The evening of 6.22, George Noory announced that the debate was being postponed because Shostak had pnuemonia. Approx. three weeks later the new date for the debate is announced : 7.21.

Stanton Friedman : "The Father of Modern Day Ufology" ... Over 40 years of study in Ufology ... The principal investigator of the famous purported UFO crash in Roswell, NM ... Author of 2 books ... Frequent spokesman for Ufology on television programs and documentaries worldwide ... Possesses a BS and MS in physics from University of Chicago ... 6 C2C Appearances in the last 2 years ...

Seth Shostak : Senior astrononer for SETI ... Web editor, author, print editor, and lecturer for SETI ... Pre-SETI work includes research with radio telescopes in Europe and the US ... Author of 4 books ... Occasional contributor to MSNBC ... Possesses a BA in physics from Princeton and a PhD in astronomy from Cal Tech ... 5 C2C Appearances in the last 2 years

Expect the debate to fall along the lines of Friedman taking issue w. SETI's refusal to examine UFO data as a part of their search for ET life. Shostak will obviously be supporting SETI's current plan of action.

Friedman is a vociferous and veteran debater known for his "calling out" of various debunkers including once saying "I will debate the Air Force's best ANY TIME and ANY PLACE." One of his signature lectures is "debunking the debunkers" in which he meticulously dissects the common mainstream explanations for UFOs and debunks them.

Not to be underestimated, Shostak has also in numerous public debates including one on the CBC against Dr.Peter Ward, author of "Rare Earth", as well as, a debate in Washington D.C. against Irven DeVore, curator of primatology at Harvard’s Peabody Museum of Anthropology. In these debates, Shostak took the stance for the possibility of life outside of Earth.

Shostak's stance against UFOs but for ET life outside Earth may hamper his argument, although one would assume he has tackled this argument before against the numerous critics of SETI's work.

In the entertainment medium that is radio, Friedman's acerbic wit will be his strongest weapon. He's already laid the groundwork by reacting to an inquiry about the cancellation of the 6.22 C2C Debate with a suspicious chortle : "I guess people will do anything to avoid a debate, but pneumonia seems a bit much." http://www.virtuallystrange.net/ufo/updates/2004/jun/m23-011.shtml

Shostak's doctorate in Astronomy should allow for a wealth of reasons why UFOs cannot be possible, most likely focusing on the vastness of the Universe. Friedman's degrees in physics and his previous work in Nuclear physics suggest his stance for a "Mallovian" form of energy utilized by ETs.

Conspiracy theorists would have a field day with this episode, as both men have been painted with the smear of being "G men" by various factions within the UFO community. With two of SETI's sponsors being NASA and JPL, Shostak bears the burden of accusations of "towing the line" for the government cover-up of the UFO reality. Meanwhile, a dark underbelly exists in Ufology that questions Friedman's role in the emergence of the MJ-12 documents and his pre-Ufology career with GE as a contractor for the Air Force.

Troubleshooting referee George Noory, when he was merely a "cub reporter", had a interview w. Friedman and now claims it was his very first interview. Will Noory's shadowy past w. Friedman come into play during the debate or will he call it right down the middle ?

If this episode had a themesong it would be the Beatles classic "Come Together" or John Lennon's "Give Peace a Chance".

On the last C2C Debate, Philip Plait trounced Zetatalk's Nancy Leider in a debate over the veracity of Leider's claims of a Planet X passing on 5.15.3