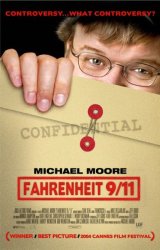 It takes a certain special something to get me to venture out to the cinema. The last time I checked out a movie while it was playing in the theater, it was long awaited Tim Burton remake of "Planet of the Apes", so it's been a while. Oscar winners have come and gone, teen sex romps forgotten (I'm looking at you, "Mean Girls"), and a stream of action flicks completely missed. But when I heard about "fahrenheit 911", I knew I had to see this film.

Going into the film, was I biased against Bush ? Yes. That's not to say I'm squarely in the anti-Bush as my feelings on politicians in general, specifically mainstream national ones, can be summed up in Woody Allen's quote from "Annie Hall" : "Lyndon Johnson is a politician, you know the ethics those guys have. It's like a notch underneath child molestor." Bush simply makes a pleasant scapegoat for the present state of affairs whereupon the human race finds itself.

Superlatives do not quite do it justice, but "F911" was, to a diehard conspiratorialist and armchair skeptic of all things mainstream, mindblowing. To hear someone speak out so prominently against the present administration is perhaps more fearful than riots in the streets. And while that may say more about current affairs than the film, one's opinion may change after seeing it. It was also reassuring in that it acknowledges the doubts and disgust harbored silently by many the past 4 years.

Filmmaker Michael Moore (have you heard of him ?) goes to extraordinary lengths to "connect the dots" from Bush to the Bin Laden family to Afganistan and, ultimately, to Iraq. The topic of 911 and the events of that day are not nearly as featured as the film's title suggests. And while his critics may decry his liberal use of facts to shape history to his perspective, those who see beyond the events of the last dozen years know that he is merely scratching the surface of a festering boil once known as the "Military Industrial Complex."

Talking points of the film : Watching Bush sit plaintively in the elementary school classroom as the planes are crashing into the WTC is an exercise in supreme frustration. The look on his face is a picture of intense confusion with shades of fear. The story of Lila Lipscomb, a mother whose son died while fighting in Iraq, is an amazing 180 degree turn with a haunting finale that is unlikely to be forgotten by anyone who sees it. The black Congressmen and women attempting to protest the Electoral College in 2000 shows that some continued right up until the end despite the mainstream media's declaration that Bush had won. The campaign to get Congressmen to sign up their children for the military is vintage Moore and harkens back to his TV show days.

My main criticism of the film is that it's only thread is really an indictment of the Bush administration, leaving unanswered questions in favor of moving on to further attacks. Those who claim that Moore is a Democratic propagandist can be mildy placated in the fact that he portrays the Democrats as impotent and weak. He also shows the mainstream media to be the fear mongering fools that they are. The many who dislike Moore personally will be happy to see he's barely in the film, letting the story lead itself and staying behind the camera for the most part.

The most surprising aspect of the film was that when it was over, the audience in my quiet little suburban town burst into spontaneous applause a reaction that I'd never experienced after seeing a film. Overall, this is film is the very definition of a "must see". The average American owes it to themselves and their nation to see this film to, at the very least, entertain a different point of view than the one they have been spoon-fed by the mainstream media since that sad Tuesday in September. Moore claims he made it to "give the choir something to sing" but, in reality and hopefully, he's given the American people an opportunity for a wake-up call to what their endless commercialistic, jingoistic, and otherwise apathetic existance has wrought.