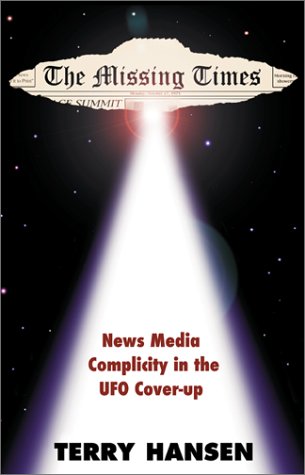 Despite the overflow of books at my disposal, I recently picked up "Missing Times" after being awed at Terry Hansen's presentation at the X-Conference. Hansen, a science journalist, takes a serious look at the lack of coverage for the UFO phenomenon by the mass media and attempts to determine its cause. He succeeds quite well in proving that there is indeed an underlying "policy" regarding reporting on this often verboten subject.

It's important to note that the subtitle of this book is "News Media Complicity in the UFO Cover-up". While conspiratorial in nature, the concept Hansen strives to convey is that "new organizations sometimes cooperate with government authorities to deceive the public about the nature and scope of the UFO phenomenon". In essence, the two bodies, government and media, work together to ensure that disclosure is prevented. Censorship and propaganda must be slowly introduced to the populace and a result of this slow integration of misinformation is that the misconceptions fed to the public become institutionalized to the point that falsehoods become "fact". The oft-cited "revolving door" of the "military-industrial complex" is extended to include the media and numerous careers are cited where reporters are former government agents and vice-versa.

Hansen starts out by talking about what brought him to the story in the first place, which was a series of UFO sighting near nuclear facilities in the 1970's. This series of sightings near Montana, were heavily covered in the local papers while being ignored for years by the mainstream media. It is this disparity between localized information and information generated for the national population that begs the question of collusion aiming to keep the UFO secret under wraps.

Before delving deeper into the UFO cover-up, the book first details a long and sordid history of incidents where the media worked with the government to sway public opinion into line with a desired policy sought by the government or other clandestine groups, most notably the CIA. Once this precedent has been set in matters of war and national security, the UFO phenomenon is added to the mix to display how, in many instances, dubious circumstances have prevented major UFO stories from breaking in a timely or factual manner.

The book breaks down into two parts from here: "censorship" and "propaganda" and Hansen details about a dozen different methods employed in each branch of the cover-up. These methods include such diverse means as recruiting journalists, lifetime secrecy agreements, disinformation, establishment of front organizations, propaganda films and television programs, and outright assassination. Many other methods are also employed ranging from sinister to clever, but each used to keep the public guessing as to the true nature of the phenomenon.

While finding concrete evidence of outright agreement between governments and media outlets is difficult if not impossible, Hansen supplies a plethora of anecdotal incidents where signs of a coverup were clearly suggested. One startling piece of evidence, and perhaps the most concrete, is a memo exchanged between two members of a CIA panel commissioned to determine how to "spin" the UFO story. In the memo, one credits working on a CBS special that put to use many of the panel's suggested propaganda methods. A whopping 24 pages of reference sources are a credit to the research by Hansen into the numerous ways the UFO story has been dealt with by all facets of the media at large.

The overall agenda of those spinning the story seems to be two-fold. The first aim is to downplay the possibility that UFOs are real and the many implications that come with that realization. The second and more subversive of the two, perhaps, is to ratchet up the "giggle factor" with regards to Ufology, thus dissuading the public from asking thorough questions or investigating the phenomenon further. Each goal of this two-pronged attack feeds the other, creating a perpetual state of public ignorance to the phenomenon as a whole.

Of the many UFO books out there, "Missing Times" provides the best education into a side of the field often overlooked or bemoaned by many researchers. For this alone, it should be read by any serious student of the phenomenon. It's unflinching investigation into the cover-up and the vast means by which it is carried out are a testament to Hansen's abilities as a reporter who does his research.